Preparing for a November in Panama, you might want to write this down.. There are 5, yes 5, days celebrating Pah-nah-MAH in the month of November. 5 National Holidays, 5 extra days off work, 5 days where banks are closed, 5 days where public offices are closed. Panamanians love a celebration and November is a month for celebration! And here they are:

On November 3rd, Panama celebrates its separation from Colombia. From 1821 until 1903, Panama was part of Gran Colombia (a republic that also included modern-day Colombia, Venezuela, and Ecuador). After the independence, fearing an invasion from Spain who still had a very strong Armada and lacking a budget to run its affairs, Panama looked towards a stronger neighbor to protect it and became part of this Republic of Gran Colombia. This turned out to be a costly decision. What followed were years of neglect and isolation by the Colombian government.

During this time, the French government began efforts to construct a canal across Panama. After the French miserably failing, the United States bought out French efforts, but soon found itself clashing with the Colombia government over payment and control of the canal. The final straw was the refusal of Colombia to sign the Hay-Herran Treaty between the US and Colombia for the construction of a canal through Panama. Panamanians had their hopes set on this canal as the means for improving their economic and social conditions which were deplorable as part of Colombia. Colombia declined on August 12, 1903. A formal separatist movement started to form and plans were made for separation. Rumors abounded and Colombia started troop movements towards Panama which forced Panamanian leaders to finally declare the Republic of Panama a fully sovereign nation on November 3, 1903 with the support of the United States, under Theodore Roosevelt.

Panamanians celebrate Flag Day every November 4th, the day after Panama declared its independence. On November 1, 1903, Maria Ossa de Amador secretly began making the first Panamanian flag. She constructed three flags based on three different designs, one of which was later adopted as the official flag of Panama. All three flags were flown on November 3, 1903, when Panama declared its independence. 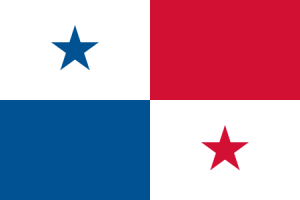 The official flag of the Republic of Panama

**On November 3rd and 4th there is an official parade in which government entities, public and private schools participate. The schools, the police and the firemen are accompanied by their own music bands and all wear full dress uniforms. The parade generally takes place on one of the main streets of Panama City which is closed for those two days. Celebrations start at 12 midnight with the Firemen Band playing “dianas”. “Dianas” are the typical way Panamanians receive and celebrate their national days. Bands that play “dianas” are composed of bugles, trumpets and drums. The parades in Panama City are typically held on Via España and in Casco Viejo.

On November 10th, Panama remembers its Primer Grito de Independencia – its first cry for independence from Spain. On November 10, 1821, preceding the formal Independence, villagers in the town of la Villa de Los Santos (a small town in the interior of Panama) wrote a letter to Simon Bolivar. The letter complained about the Spanish governor and asked Bolivar for revolutionary assistance. 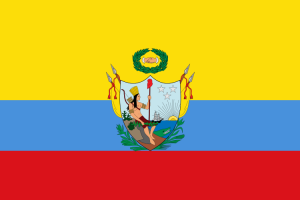 The first flag for Gran Colombia

On November 28th, Panamanians celebrate their independence from Spain. On November 28, 1821, eighteen days after Primer Grito de Independencia, Panamanians took the first step towards this sought-after independence. In an open town meeting Panama was declared a sovereign entity and was freed from the control of the Spanish Monarchy, deciding to join Gran Colombia.

**November is a time of celebration in Panama, and Panamanians are not gonna miss a good party! So if any of these holidays fall on a weekend, Panamanians have invented what they call a “bridge holiday”! For more info on what a bridge holiday is, you’ll have to sign up for a Barefoot Panama Tour! See you soon..

Please note that your tour reservation is not guaranteed until at least a 50% deposit is given. Once payment is received your tour confirmation will be emailed to you. Immediate payment is not required at the time of completing the tour booking form. After receiving your reservation request a representative will contact you to confirm you tour selection, availability, schedule a pickup time and review any special considerations, as well as provide payment details. If you have any questions please contact us